What connects motorcycles and cheesecake? 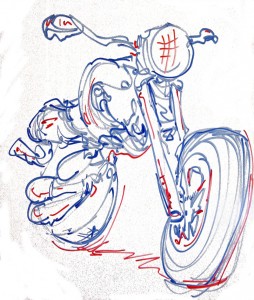 Both are  supernormal stimuli: Human creations designed to stimulate human senses beyond what we’ve encountered naturally during our evolutionary past. Driving a motorcycle is to taking a pleasant fall walk as eating cheesecake is to biting into an apple. In other words, supernormal stimuli are hyper-extreme sensations.

Riding a motorcycle is more exciting than walking, and cheesecake is richer than an apple. And while not all superstimuli are dangerous, these two examples are. The visceral danger of crashing a fast-moving and unsteady motorcycle is particularly vivid, however, the danger from the fat and sugar cocktail composing a cheesecake is equally real: Such foods contribute over time to metabolic syndrome (an epidemic in the US, and a general cause of obesity).

Because obesity leads to more overall deaths, slow-moving cheesecake is arguably more dangerous than a crotch rocket. The more general problem is that humans don’t pay much attention to slow-moving, incremental, dangers no matter  how serious they may be in reality (e.g. global warming vs terrorist atacks).

Superstimuli like motorcycles and cheesecake are a consequence of memetic evolution, or the evolution of ideas. Like natural evolution, where organisms compete with each other, in mimetic evolution ideas compete with each other for room in our brains. In the mind of a chef, various recipes may compete, and ultimately those recipes that are tastier and lead to more sales, will be those that the chef will make more often.

We go to a restaurant not to eat raw carrots, but for a delicious and often decadent meal. And people buy motorcycles for the same reason as they pay to go to theme parks, for the exhilarating rush they provide. Thus motorcycle manufacturers, like chefs adept at satisfying our taste buds, stay in business. In this way, capitalism, which is driven by human desires, produces cheap products that can undermine human health. So in a roundabout way, the nature of economics leads to a foods arm race playing off of human weakness.

I’m not saying that capitalism is evil, only that we must be aware of the evolutionary pressure capitalism can create. That is, capitalism can drive the creation of products that increasingly exploit our many human weaknesses.