Reddit is a river of content. Sometimes different posts collide in my mind in interesting ways. Because I like to think about innovation, these collisions sometimes relate to how interesting things are created. 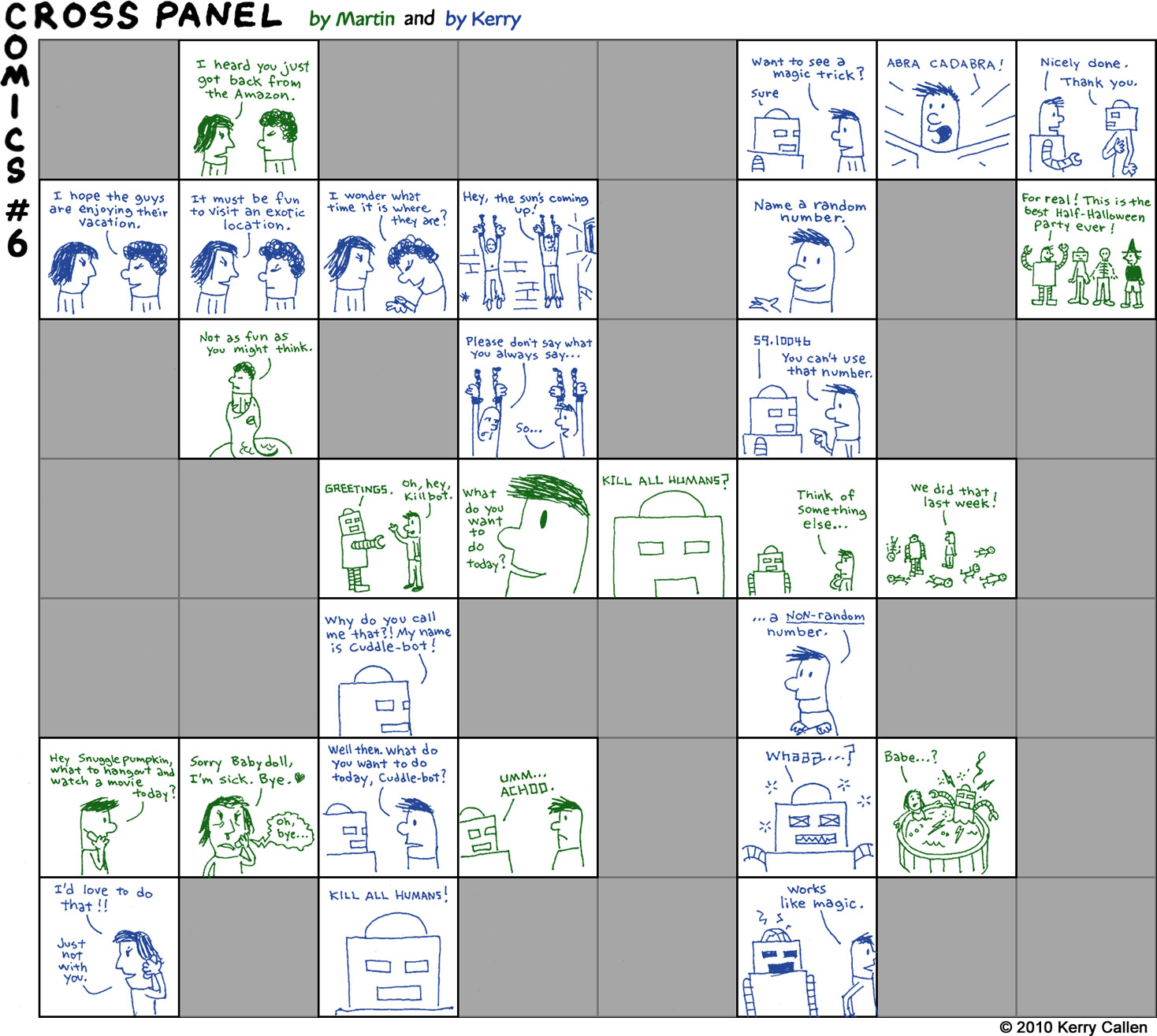 Take for instance a post on comic crosswords, where the format of newspaper crosswords is merged with that of comic strips; that is, instead of words that overlap, the crossword consists of funny overlapping mini-comics, where intersecting comics must share a common frame.

It’s an innovative take on comic strips, an unexploited comic-niche. I would read more of them if they were well done (which this one is). It reminds me of the artist that only draws comic strips on the back of business cards. The format, whether of shared frames or the inherent size limitations on a business card, imposes interesting constraints. When these constraints are met in clever ways they can impress and entertain us.

A separate example is of a raptor hoodie that has awesome integrated functionality: If a kid crosses his arms in front of himself, they act as the movable jaws of the raptor that can be chomped. When I first saw this, I was impressed by the cleverness of the design; the form of the shirt acts on two levels, the sleeves are reinterpreted as jaws that interact with the shirtfront. If I were a 10-year old boy I would have loved something like this.

Now, you might wonder why I believe these examples relate to innovation in general — why should someone trying to create care about raptor shirts or strange comics? We can learn from these examples — in an abstract way — to help us become more creative.

Take the crossword comic example. The nature of the innovation is a clever recombination of comic strips and crossword puzzles. Can we analyze this particular example to create other clever combinations? What is the general spirit of a crossword puzzle that allows it to be melded with other concepts? This is all about searching for a good abstraction.

The main abstract concept underpinning a crossword is one-dimensional sequences of atoms [letters] that form larger holistic units [words] that are embedded and overlap in a two-dimensional space. In a traditional crossword, the sequences are of letters and the larger unit is a word. In the crossword comic, the sequences are of comic frames atoms, and the holistic unit is a cohesive joke formed from the frames. In this case, the innovation comes from varying the units.

Variations on a Theme

Here’s the interesting part: We can think of other things with the same abstract properties and recombine them as well to make something cool and new. The trick is to think of examples where we build from some smaller vocabulary a larger coherent construction. Each individual part of the vocabulary should be ambiguous enough to serve a different role in multiple constructions, e.g. a letter serves different purposes when at the intersection of two words.

A trivial straightforward example would be cross-poems, where lines (or even stanzas) of a poem form the lower-level units that compose an entire poem. Because lines of poetry are sensitive to context (like individual letters or frames of a comic), they can be utilized creatively in the intersection point for different ends in both of the resulting poems. Two poets could take turns laying down short poems as a fun collaborative exercise.

But the point is that working on the abstract level lets you consider other possibilities for crosswords easily;  you clearly state the rules of the game you are dealing with so you can vary them. The dimensionality can be varied (you could have 1d sequences embedded in 3d space for a 3d crossword, or 2d patterns embedded in a 3d space), additional constraints can be added (the sequences must make sense when interpreted both forwards and backwards), the 1d sequences can curve in space rather than be strictly linear (imagine crosswords not based on a strict grid, but with spaces of varying sizes and connectivities, e.g. hexagon-based crosswords). There are many creative possibilities, many never-before-explored, ripe for discovery.

Taking a closer look at the other example, the raptor hoodie is a really cool example of exaptation, where things created for one purpose (sleeves of a shirt) are adapted to an unforseen context (acting as the moving jaw of a raptor). The abstract idea here is that a functional item [t-shirt] can have its aesthetic properties [design] hijacked to serve a secondary function [raptor jaws]. Now this is an interesting abstraction as well to play with as well, but I’ll leave it as an exercise to the reader to think of fun generalizations or to examine if there are other ways to learn from the raptor hoodie.

The point of this post is just to illustrate that by deeply examining something that we find interesting, we can learn the meaningful degrees of variation that may lead to many more interesting things in the same spirit. In other words, we reverse-engineer to isolate the meaningful conceptual knobs we can twist to further create.