It was 3:30 in the morning. I wasn’t the least bit tired. Tossing and turning in bed is miserable — you just want to be asleep. I had even gotten up early and should have been exhausted. I groped for some reasonable explanation. Then, I recalled a similar situation: I once bought regular coffee thinking it was decaffeinated (I’m a mental klutz sometimes) and had a cup before bed. I’m sensitive to caffeine.

An unlikely hypothesis formed in my mind. I’d bought some Diet Sunkist earlier and had consumed about a liter and a half before I went to sleep (yes…not the healthiest choice, I’m aware). But…surely, it wasn’t caffeinated? When the search results for “diet sunkist caffeine” done on my bedside cellphone came up with “WTF? Diet Sunkist has caffeine in it?” and other modulations of surprise and/or rage, you can imagine my frustration. Until I fell asleep at 4:15, I was seething at Sunkist’s makers for stealing time from me.

Sunkist Principle: Be Explicit When You Violate Common Assumptions

Unlike many other competing orange sodas, Sunkist contains caffeine (41.0 mg).

Now, maybe most of you already knew that Sunkist had caffeine in it. But why are there people like me who were surprised? Because Sunkist is an orange soda, and oranges aren’t caffeinated.

At first glance you might think I’m an idiot; of course Diet Sunkist is made entirely out of a chemical soup that is the opposite of earthly oranges. But we humans rely on certain patterns to manage the chaos of the world. This is why I fell prey to a naturalistic assumption: When something is created artificially in the spirit of something natural, most of the natural thing’s functional attributes will be mimicked in the artificial.

In other words, an orange soda, even if artificially flavored, brings to mind the concept of an orange. So one’s basic assumption (without other information) is that orange soda will not be caffeinated. And in line with this assumption, nearly all fruit sodas are not caffeinated. An interesting related fact: Nearly all Root Beers have no caffeine, except for Barq’s.

Anyone doing design work should keep this in mind: User anger often results from violating intuitive assumptions. For example, take fab.com, “the marketplace for everyday design.” A facebook ad came up for an interesting sale of what looked like a homemade guitar kit. So I click. Here’s what I see: 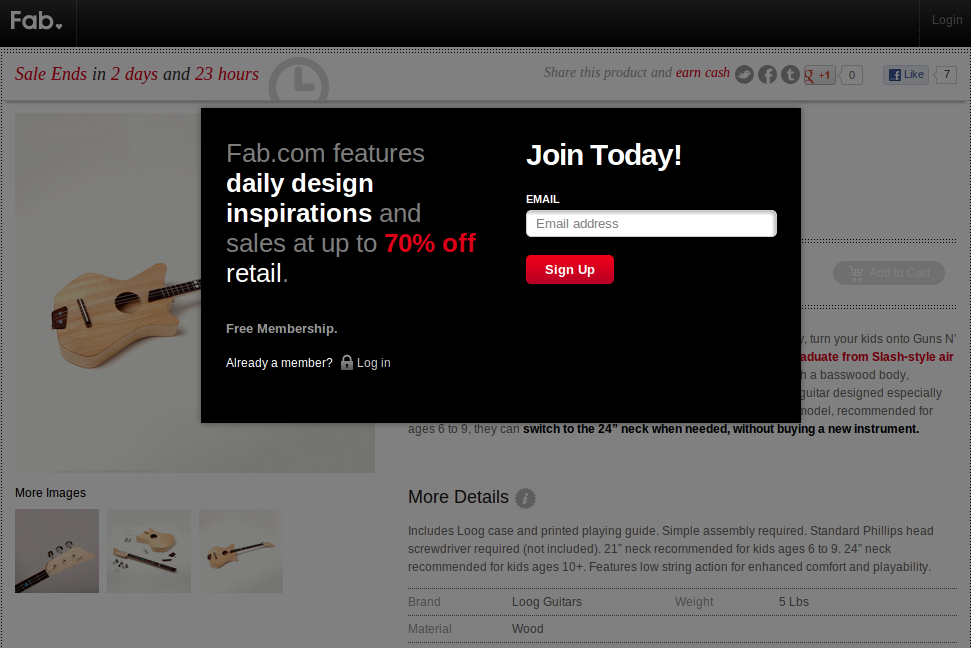 What is awful about this is that this meets my expectations for a page in which I can get more information about the guitar. This is what page seems to do. In fact, I can see the guitar that I am interested in, in the background. So my assumption is that like all other such pages I will be able to view the information and perhaps buy the kit if I am so inclined. But I can’t. I can’t bypass this overlay unless I give my email address.

Why? It doesn’t explain why I must join before I can peruse the information. There is clearly no added function for this overlay — and I can’t click around it! This non-functional block just screams sleeze, because it is clear that although they could let me just see the guitar — they won’t, unless I give them personal information. Perhaps there is a legitimate reason for this kind of deception, but it is not explained, so I must assume it is just a tacky gimmick to get me on their mailing list.

This immediately reminded me of experts exchange, the sleazy technical Q/A website that would show you part of an answer to a question you had, then ask you to pay money to join. Perhaps this association alone made me never want to return to the fab website.

When you break my expectations, at least give me a reason! At least acknowledge the deviation from my assumptions. Sunkist: Put a label on your product that says it is caffeinated. Fab: Give me a reason why I should have to give you my information — even if it is just an admission of what I expect: “You can’t view the site until you sign up, because we really want your e-mail address to bug you whenever we feel like it.”

However, in the end the Sunkist principle is just a corollary of a broader design principle: The overall design should be unified in an overarching purpose. For satisfying humans, this kind of purpose should nearly always include rarely having things work in unintuitive ways, and explicitly acknowledging and explaining exceptions when they are really necessary.